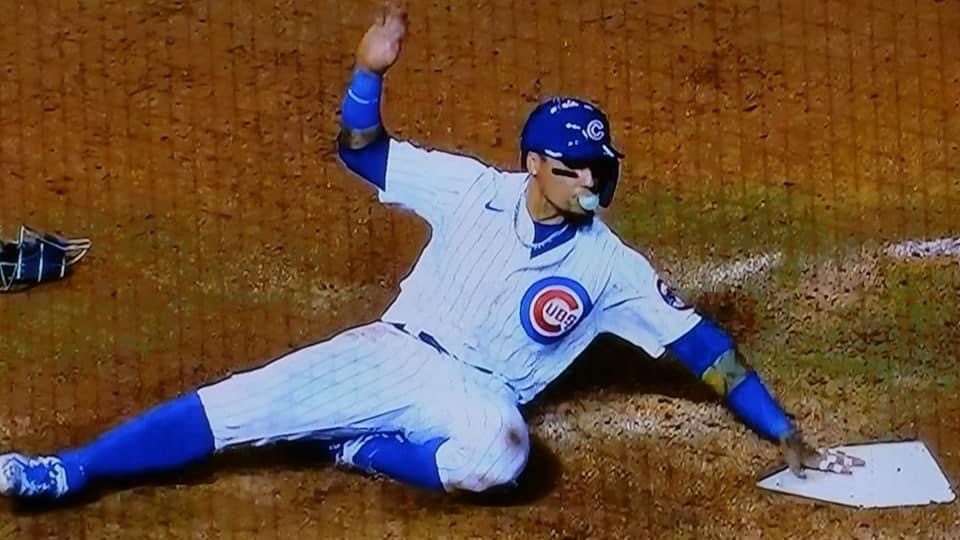 CRAZY and PAINFUL CUBS WIN!!! BACK TO BACK HIT BY PITCH BEATS THE TRIBE!! EL MAGO SHOW!! A bit of a see-saw game. Darvish didn’t have his A game. As he said, “I was terrible!” He battled & kept the Cubs in the game. Indians made quite a bit of contact, but the defense helped out.

After 2 fairly quick innings, the Indians put up 2 runs in the 3rd to take the lead. 3 straight hits scored 2, double, single, & double. With 1 out & Lindor at 3B, Ramirez flied out to RF. J Hey winds up & throws a strike to home & nailed Lindor for an inning ending DP! Another double & single in the 5th scored another Indians run. Wick replaced Darvish at the start of the 8th. He walked the leadoff hitter, Santana. He gets erased as Reyes hit into a DP. Naquin singled, but Leon struck out looking to end the inning.

Jeffress Express comes in to close it. A little shaky as he walked the leadoff hitter, Naylor. Deshields grounded out to KB, Naylor to 2B. Lindor hit a sinker that didn’t really sink to the LF bleachers for a game tying 2 run HR. Freeman walked, Ramirez grounded into a DP to end the inning. That would be the 2nd blown save for Jeffress this season. The top of the order has been struggling. A lot of strike outs between Happ, KB, & Riz. Not tonight! 7 combined hits & 2 RBI’s. Although, it didn’t start that way. Happ started out going down swingin’ & KB swingin’ at a slider way out of the strike zone. El Mago got the Cubs on the board in the 2nd with a solo 450′ BOMB to the CF bleachers. Cubs tie the game at 3 in the 5th. With 1 out, Happ doubled, KB singled scoring Happ, Riz doubled scoring KB. Cubs score 1 run in each of the last 3 innings. Willie sac fly scoring KB in the 7th. Some excitement in the 8th. Baez got hit by the pitch, Heyward goes down swingin’ but Baez took off for 2B. The throw to 2B was way off & went into CF. Baez went to 3B, but didn’t stop. Venable waved him in & the throw home was to the 3B side & bounced away as El Mago blows a bubble as he slides across home plate. If Leon would’ve caught the short hop, Baez probably would’ve been out & the Tribe might’ve won the game on Lindor’s HR the next inning. Crazy how things worked out.

Even crazier was the bottom 9th. With 1 out, KB walked & advanced to 3B on a Riz single to CF. Pitching change, Perez out/Wittgren in. He had no command as he threw 3 inside high pitches to Willie & hit him on the top of his hand. Lets hope he’s ok!! That loaded the bases. PH Maybin with the Walk Off HBP! He got drilled in the rib cage on the first pitch scoring KB to end it. Let’s hope he’s ok, too!

Big Jon goes for the sweep tomorrow night. He was vintage Lester in his last start. Let’s hope it carries over! Cards get crushed 18-3 by the Brew Crew, gives the Cubs a little more breathing room.Game Time: 7:15pm CT

El Mago with the Walk off Winner!
Angels among us!