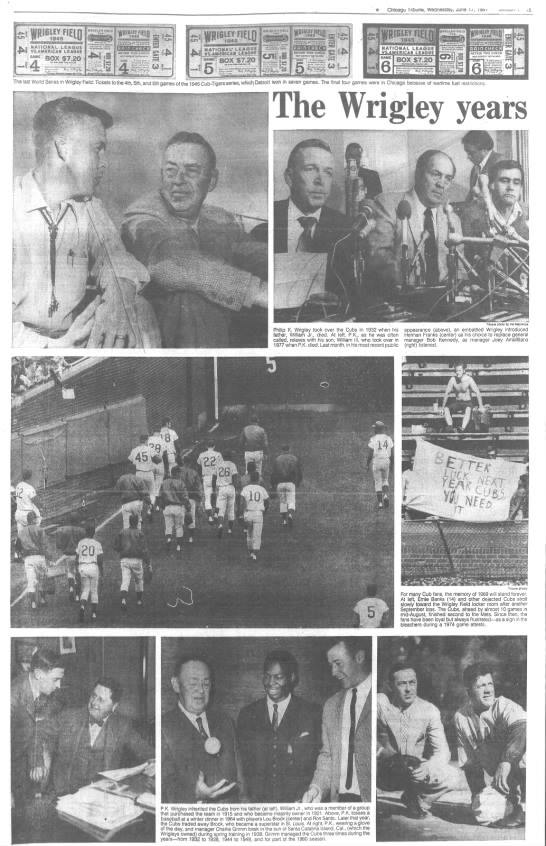 June 16 1981
39 years ago today Wrigley sells the Chicago Cubs to the Tribune Company, parent of The Chicago Tribune and The Daily News in New York. Mr. Wrigley, a Chicago chewing gum manufacturer, ended a family association with the National League team that began when his grandfather became a minority shareholder in 1916.

”Baseball is becoming more demanding of tremendous financial capacities,” William J. Hagenah Jr., the president, chief operating officer and treasurer of the Cubs, said by telephone from Chicago. ”You’ve got to just have an awful lot of money to play ball these days. That’s what prompted these changes.”

”The Wrigley family, first with Phil and later with Bill, has been very dedicated to the best interests of the game,” Mr. Kuhn said, referring to William Wrigley and his father. ”For over 60 years, indeed from the time of the first commissioner, Judge Landis, they have vigorously supported the integrity of the game. While they have gone through thick and thin days on the field, their franchise has produced some of the game’s premier players – people like Gabby Hartnett, Billy Herman, Hack Wilson, Billy Williams and Ernie Banks. They have always been first-class executives for baseball.”

The team Sold for $20.5 Million. The Chicago Cubs have at least 3 players making that much on the team today.