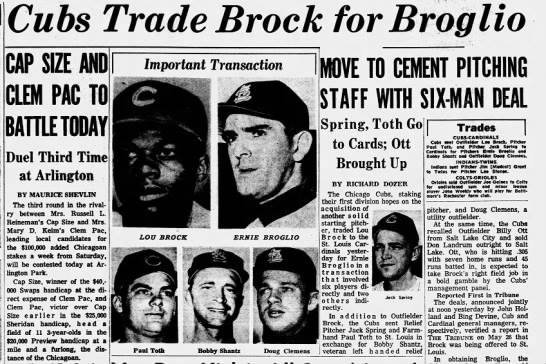 In a six-player transaction that also includes Jack Spring, Paul Toth, Doug Clemens, and Bobby Shantz, the Chicago Cubs trade a little-known outfielder named Lou Brock, who will become a fixture with the St Louis Cardinals for the next fifteen years, amassing 3,023 career hits, to St. Louis for right-hander Ernie Broglio. The deal, thought at the time to be a steal for the Cubs, will become infamous when the former 20-game winner pitches poorly for his new team, posting a 7-19 record during his brief two and half seasons with the team, and the 24 year-old they gave up enjoys a Hall of Fame career.